Last month I attended the Global Competitiveness Forum in Riyadh, Saudi Arabia. More business-focused than developmental, it gave me the chance to take our work not only to a new audience, but to a new region. The “Conscious Capitalism” panel I sat on also focused on some of the questions I’ve been increasingly thinking about, and the conference theme of “innovation as a means to competitiveness” resonated.

Despite that, it was never going to be easy to get away from the fact that this was primarily a business conference. The discussion was dominated by how you might “harness innovation”, if that were ever possible. How could businesses become innovation hubs or centres of excellence? Why is it important to link the business, technology and education communities (something Silicon Valley seems to do so well)? It was a fascinating three days, but many of the delegates seemed to be missing a trick. (To be fair, many of them probably weren’t looking).

Entrepreneurs were worshipped, and business models praised, but much of the focus only took into account those people with an eye for business, or a knack for creating compelling business models, or making money. I found myself sitting in the middle of an “innovation divide”.

After a few years working in the non-profit/technology world, I’d say the landscape could be summed up as:

1. People with ideas and business models are called entrepreneurs.
2. Everyone else is an innovator.

The interesting thing for me is that, whilst the mechanics of entrepreneurship can be taught, most innovation is random, personal, demand-driven, inspired and instinctive. In short, innovation occurs naturally in the real world. Balance sheets and P&Ls, on the other hand, do not.

From where I sit, the whole “social entrepreneurship” discussion to date seems to have been dominated by the business side of things – those predominantly in the first line. Innovators unable to make a business case for their ideas struggle for visibility. To compound the problem further, for technology innovators in particular, “unsustainable” is a four letter word in their industry, resulting in even more doors closing ahead of them. Examples of fully sustainable mobile-based innovations are few and far between, as anyone who works in “mobiles for development” will know.

Innovators with world-changing ideas, solid business models and a steady income stream are the creme de la creme. They’re the ones paraded around at social entrepreneurship conferences. Many started off wanting to be “social entrepreneurs”, and many are highly ambitious and studied hard to get there. I’ve probably met hundreds over the years.

Most innovators I know never started off as such. Few remember ever saying to themselves “I want to innovate”. They’re what I’d call “reluctant innovators” – people who found themselves in the midst of a problem they felt compelled to solve. Frontline healthcare workers who see a medial problem with no solution and come up with one, or a farmer who loses a crop but finds an answer and implements and shares it. The majority of people in the developing world finding everyday solutions to everyday problems are reluctant innovators. They didn’t ask to be, they became. Real world experience was their education, not an MBA. 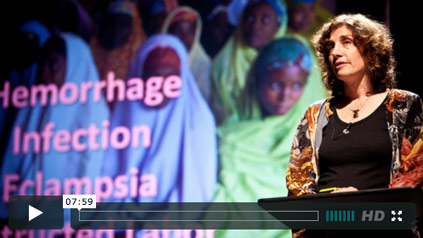 One of the best examples of a “reluctant innovator” I’ve come across is Laura Stachel, who I first met at a conference in New York back in 2009. Laura’s organisation – WE CARE Solar – designs portable solar lighting kits for maternity wards in developing countries (click the image above to watch her five minute Pop!Tech 2010 video).

When she first headed out to Nigeria, she was planning to work on something entirely different, but after realising that a simple lack of lighting was responsible for an unacceptable number of mother and child deaths – maternal mortality rates in Nigeria are among the highest in the world, with a ratio of 1,100 maternal deaths occurring for every 100,000 live births – she turned her attention to helping design, build and distribute solar kits to solve it (see photo below). Laura never intended to build and run an organisation, and never chose to become a solar innovator, but seeing a problem she felt compelled to fix, she reluctantly became one. 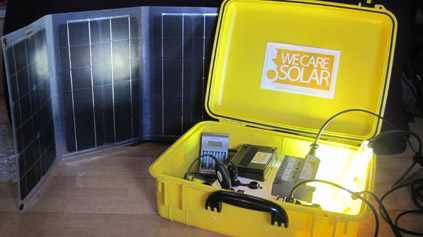 I would also count myself as a reluctant innovator – FrontlineSMS was never planned – and the team behind Ushahidi would likely feel the same. They were simply responding to a crisis in their country. None of us went out looking for something to solve. A problem found us, and we felt compelled to solve it.

I’d argue that most of the more successful innovations in ICT4D have come about this way – solutions created not by ‘traditional’ innovators, or technologists, but regular people who find themselves on the frontline of a challenge, and who decide to not turn their backs but to take it on. I think we can all learn from this – the social entrepreneurship sector included.

115 thoughts on “The rise of the reluctant innovator”