Earlier this year, IATP Ukraine launched three pilot projects using FrontlineSMS. In this, the thirteenth in our series of FrontlineSMS guest posts, Yuriy Selyverstov – the Dnipropetrovsk Representative from the Internet Access and Training Program (IATP) – describes two of the projects

Tamarisk, a Ukrainian NGO,  plays the key role of resource center for local third sector organisations in the Dnipropetrovsk region. It organises and conducts training for NGOs, and hosts joint round table events for mass media, local authorities and other NGO representatives. Because of this it is important that Tamarisk be able to inform their target audiences about upcoming events. E-mail lists, a web portal for local NGOs, phone calls, and personal contacts have been traditionally used for this purpose.

In March this year, Tamarisk – in co-operation with the IATP program – launched a pilot project that uses FrontlineSMS to disseminate information to target audiences via SMS. By June there were over a hundred NGO subscribers with additional numbers being added regularly. Subscribers are organised into several groups depending on the field of their activities, and since the start of the project over 300 messages have been sent. The effectiveness of SMS sending is well illustrated by the International Renaissance Foundation, who held a presentation at the Tamarisk offices in April. About 60% of the participants found out about the event via SMS.

The following conclusions were drawn after the first three months of using FrontlineSMS:

Tamarisk now plans to increase the use of FrontlineSMS in its work.

In the second project, “Doroga Zhizni” (Road of Life) applied FrontlineSMS in the field of HIV/AIDS and tuberculosis transmission prevention and treatment. The target audience are injecting drug users and former prison inmates.  “Doroga Zhizni” is part of the all-Ukrainian “Network of People Living with HIV/AIDS“. 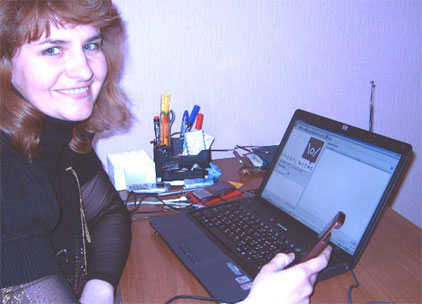 For two months starting in March 2009, a pilot group of users with mixed HIV/TB diagnosis received scheduled text messages twice a day reminding them to take their pills. After the two months were up, feedback was collected from the group asking their opinion about the effectiveness of the service. In total, 90% of the group replied that SMS effectively helped them not to forget to take their pills, and that they wanted to receive SMS in the future. Only 10% said SMS was not helpful. Overall, 50% of the group noted positive psychological benefits – the messages made them feel that they were not alone and that somebody cared about them. The project concluded that FrontlineSMS was effective in improving patient adherence to prescribed treatment.

“Doroga Zhizhi” now plan to recommend using SMS reminders with all of its clients, starting this summer. To make this scaling possible they plan to request additional funding from their donor to cover the cost of the messages.

IATP is funded by the United States Agency for International Development (USAID) and implemented by IREX, an international nonprofit organisation that delivers cross-cutting programs to strengthen civil society, education, and media independence in more than 50 countries

Medicine stock-outs are a potentially lethal problem in a number of African countries, yet governments insist they don’t occur. What could be more powerful than a map which contradicts this claim?

Each of these are seen as essential in varying degrees to fighting disease and illness, and are widely used when available.

Armed with the data, activists report their results via structured, coded SMS – “x,y,z” – where the first number represents their country code (Kenya, Malawi, Uganda or Zambia), the second their district or city, and the third the medicine which they found to be out of stock.  These messages are received by a phone connected to a computer running FrontlineSMS, which then runs an automatic script which validates the data before it is sent over the internet to a Ushahidi-powered website.

From there the results are automatically displayed on a map, below (click to visit the live site). 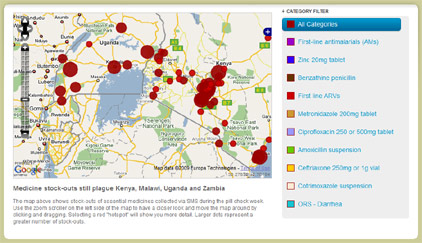 As of today, there have been over 250 stock-outs of these essential medicines.

Since the data is automatically populated, the map represents an almost real-time picture of stock-outs in the four target countries. After a successful launch and a week piloting the service, the “stock-out hub number” will now be distributed to medicine users throughout each country so that anyone with a mobile phone can send in a stock-out report. Unlike reports from official, known data collectors, these messages will firstly be checked by staff at Health Action International (HAI Africa) before being posted up on the map. 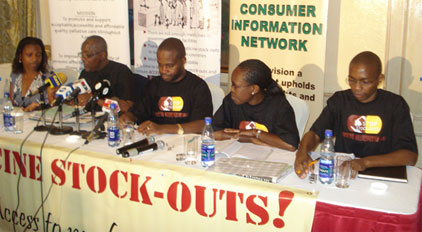 The technological portion of the campaign was implemented by Michael Ballard and Claudio Midolo, both Open Society Fellows from the Department of Design + Technology at Parsons the New School for Design in New York.  Ndesanjo Macha also helped in getting FrontlineSMS up and running in Uganda and Malawi.

Today sees the launch of an exciting new initiative – FrontlineSMS:Medic – by a growing team of students mobilising around the practical application of mobile technology in global healthcare delivery.

FrontlineSMS:Medic combines Josh Nesbit’s pioneering work on “Mobiles in Malawi” with a mobile version of OpenMRS – an open source medical records system – and an exciting new remote diagnosis tool. In this guest blog post, Josh Nesbit and Lucky Gunasekara talk about the origins of the project, and their plans in the coming months.

Josh: I should be heading off to class, right about now. I’ll go, but not without telling a story, first. A convergence of ideas and people marks the launch of FrontlineSMS:Medic and the team’s embarkation on a quest to do mHealth the right way.

Many of you are familiar with the role FrontlineSMS, a donated laptop, and a bag of recycled cell phones have played in connecting community health workers (CHWs) in Malawi to a rural hospital and its resources. Text messaging is now an integral component of the hospital’s infrastructure. FrontlineSMS has proven intuitively easy to use with strong user buy-in. The program is horizontally scalable, and incredibly cheap to run, matched with indisputable savings in time and costs. Enter Lucky.

Lucky: I am the bewildered South Asian guy in the photo. Back in 2008, I was sitting in an office in Tokyo reading about cellphone penetration in developing countries, wondering if mobiles couldn’t also be used for boosting healthcare delivery in resource poor settings. When I wasn’t wearing a suit and riding to work in a packed Tokyo subway car, I was wearing a t-shirt and khakis and working in clinics in Sri Lanka – accepting an offer to attend  Stanford Med, this year. I worked out that SMS could be used in tandem with an open source electronic medical records system called OpenMRS, allowing for continuity in patient care from the community health workers to the clinic.  Meanwhile, Josh was sweating it out in Malawi, actually learning this the hard way. Just to prove that good ideas are obvious, Isaac Holeman and Daniel Bachhuber, two students at Lewis & Clark, had the same realization and began working on a project called MobilizeMRS to get this underway.

Josh: Long story short, we’re all working together now. Lucky is pictured on stage with Bill Clinton, as his CGI U commitment is announced on the group’s behalf.

Lucky: The commitment is, briefly:

To build on kiwanja’s CGI commitment of an Ambassadors Program within FrontlineSMS, by developing a new version of FrontlineSMS – FrontlineSMS:Medic – for use in clinics in developing countries. That Medic will have end to end of continuity of electronic medical records by fusing FrontlineSMS with OpenMRS in a modular click-to-add format. I will be taking a year off from medical school (a decision infinitely popular with my folks) to work on this system and develop new partners on the ground with Josh, and do research on a new breakthrough medical diagnostic system at UCLA, that we feel will be the “Killer App” of FrontlineSMS:Medic. More on that to come. We’re also going to be fully open source with wiki user manuals and off-the-shelf healthcare packages for download, so setting up a DOTS-TB program doesn’t have to be any harder than buying a song on iTunes… OK, maybe a little bit harder… but not by much.

Josh: We’re planning to pull this off within a year, operating in more than 25 pilot study and partner clinics by the summer of 2010. The system will be free and so will the hardware. Check http://medic.frontlinesms.com regularly to learn more and get involved.

In this, the first of a series of guest posts on how FrontlineSMS is being used around the world, Becky McLaughlin – Marketing Director at Rien que la Vérité – talks about their current use of the platform, and the impact it has had on their work

“Based in the Democratic Republic of Congo, Rien que la Vérité was born in 2006 when some of the finest musicians in the Congo united to produce a CD of songs speaking against the spread of HIV/AIDS. Since 2006, the Rien que la Vérité platform has produced 14 music videos, a documentary, and an all-day stadium concert. In its present incarnation, Rien que la Vérité is touching the lives of the people of the Congo through their television screens as they follow the lives of a Kinois family on a locally-produced TV drama. 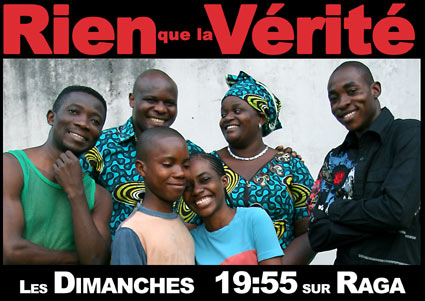 Rien que la Vérité – the TV series – launched nationally on November 30th, 2008 and first implemented FrontlineSMS in the airing of its second episode on December 14th. Each episode broadcast is accompanied by short talk-show segments during which a host introduces music clips, talks to well-known musicians and actors, and interviews representatives from local NGOs and organizations whose message dovetails with a theme introduced in the show.

During the December 14th show, the audience was invited to participate by sending an SMS with the name of their favorite character. The responses were collected using FrontlineSMS. This simple first step allowed Rien que la Vérité to test the software and to begin an exploration of our audience’s perceptions and preferences. As the show continues we plan to introduce more simple polls that will help tailor the show to the audience’s tastes, and give viewers a sense of ownership of the program.

This, however, is the most basic use we foresee. We are now launching a drive to support fan clubs, so that people who watch the show can find each other, meet, and talk about the show and the topics it introduces – a process that will begin to normalize conversation about HIV/AIDS. We’ll use FrontlineSMS to collect contact information from interested fans, then broadcast messages with times and locations for local club gatherings. We also intend to use FrontlineSMS in our research for measuring the impact the show has on our target audience. We’ll send out questions via SMS to fans before and after each show, measuring any changes in attitude, knowledge, or self-reported practices due to exposure to the show’s messaging.

FrontlineSMS will be a critical tool in our goal to entertain and educate. Like its television format, Rien que la Vérité’s future development must remain grassroots, and FrontlineSMS is an excellent vehicle for this.”