This page contains a selection of guest articles, book chapters and interviews over the years. There’s more writing in our PC World column, The Guardian’s Global Development site, our Digital Diversity series on National Geographic, a one-off for Wired Magazine and, of course, the kiwanja.net blog.

You can download free PDF copies of two of our books from this page. If you enjoy them, online reviews are always helpful and welcome.

February 2022
The Pursuit of Purpose – Part Memoir, Part Study: A Book About Finding Your Way in the World

Come on the unlikeliest of journeys as we follow one man’s desperate search for purpose. Join him as he seeks answers in the African bush, the forests of Finland and everywhere in between, surviving pirate attacks, near-drownings and close encounters with lions along the way.

Discover how a random idea late one night led to the creation of a text messaging system that would go on to benefit millions of people around the world, and how a global pandemic helped uncover an incredible family history, and with it the answers to a life purpose that had lay hidden in plain sight all along.

“Musings of a Mobile Anthropologist: Tales of technology, anthropology, conservation and development” is the definitive collection of writing and blog posts from kiwanja.net spanning over a decade.

Previously, some of our most popular articles were shared annually in a collection of favourite posts, and these turned out to be popular among students and academics who found them useful conversation starters and discussion themes. To build on this, we decided to publish over seventy of the most thought-provoking posts from the past twelve years in one place.

“Musings of a Mobile Anthropologist” is free to download and share on the kiwanja website – in PDF format – via the link above. The eBook is also available for a small fee in the Amazon.com and Amazon.co.uk Kindle stores, and as a paperback in all Amazon stores (regular book prices apply). 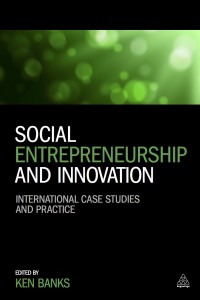 Social innovation and social entrepreneurship look for creative and affordable solutions to specific societal problems. Fuelled by the spread of the internet and the ubiquity of mobile phones, there are more people working to solve pressing social and environmental problems in the world today than ever before in human history. “Social Entrepreneurship and Innovation” presents the journeys of pioneering – and often accidental – social innovators who, faced with a problem, used their courage, tenacity and creative thinking to find a solution.

Using their own words to reflect on their experiences, these cases do not gloss over the setbacks and the dead ends social entrepreneurs can face. Instead, readers will gain a realistic insight into the challenges and an engaging look at the problem-solving mindset needed to overcome them. From a life-saving project to bring solar-powered lighting to midwives in Nigeria, to a news dissemination service that’s grown from small beginnings to have a global impact, each case study draws out the lessons learnt by the innovators, providing guidance and advice for those looking to follow in their footsteps. “Social Entrepreneurship and Innovation” is an invaluable resource for social entrepreneurs and innovators looking for new ideas and insight into what really works – and what doesn’t. This book is an inspiring read for anyone with a social conscience and a desire to change their world for the better.

“Social Entrepreneurship and Innovation” is available n the Amazon.com and Amazon.co.uk Kindle stores, and as a paperback in most online stores including the publisher, Kogan Page.

Classes in social innovation, social entrepreneurship and design thinking have become increasingly popular in recent years. On the one hand, this might be seen as a good thing. After all, the world needs as many smart, engaged citizens as it can get, particularly when you consider the multitude of challenges we face as a planet. But does a career in social change really begin in the classroom, or out in the real world? How much social change is planned, and how much accidental? And which approach tends to lead to the most meaningful, lasting or impactful solutions?

With a foreword from Archbishop Desmond Tutu, “The Rise of the Reluctant Innovator” provides a welcome challenge to conventional wisdom in social entrepreneurship. It highlights the personal stories of ten social innovators from around the world. Ten social innovators – ordinary people – who randomly stumbled across problems, injustices and wrongs and, armed with little more than determination and belief, decided not to turn their backs but to dedicate their lives to solving them.

“The Rise of the Reluctant Innovator” is free to download and share on the kiwanja website – in PDF format – via the link above. The eBook is also available n the Amazon.com and Amazon.co.uk Kindle stores, and as a paperback in most online stores (regular book prices apply).

BBC News: September 2009
Mobiles offer lifelines in Africa
If you want to see how east Africa may respond to the arrival of high-speed internet links, look no further than the mobile phone market, says developer Ken Banks.

Guardian Online: March 2014
Digital technology means development is now happening outside the system
The spread of the internet and rise of mobile phone ownership means more social entrepreneurs are succeeding outside the traditional development system.

Guardian Online: December 2013
Innovate or die: what it takes to transform global health
Social entrepreneurs are changing the lives of millions in the developing world, but it is often a lonely and frustrating journey. Ken Banks shares his tips for success for would-be innovators.

Guardian Online: January 2012
Technology’s new chance to make a difference in 2012
The ICT4D community must close the gap between the hype around new technologies and the reality in the developing world.

Guardian Online: June 2011
Activate 2011: Technology powered by people
The one-day conference on technology and development made clear it’s not just about technology, but who uses it and how.

Guardian Online: February 2011
Mobile conference needed more debate on development
An ‘intense’ annual congress of the mobile phone industry could have focused more on the non-profit use of the technology.

Guardian Online: January 2011
Technology’s role in fighting poverty is still ripe for discussion
As technology blazes a trail, policy and procedure are playing catch-up to harness the benefits for development projects.

Stanford Social Innovation Review: December 2015
The Top-Down, Bottom-Up Development Challenge
Do international development projects designed and managed at the grassroots level perform better overall than those managed from the outside?

Stanford Social Innovation Review: April 2015
From Projects to People: Addressing a Donor Funding Imbalance
Donors are always calling for innovative thinking, so why not show a little inclination to innovate themselves?

Stanford Social Innovation Review: September 2014
A New Donor Code of Conduct
Donors are in an ideal position to stem the flow of poorly thought-out or inadequately planned technology-for-development projects.

April 2016
Horizons or Mirages: Exploring the Potential and Limits of Digital Innovations (PDF, 239Kb)
Co-authored chapter for NESTA’s ‘Innovation for International Development’ collaborative book examining the opportunities of digital technologies and the potential problems of over-reliance as a development panacea

October 2015
Digital Technology and Human Development: A Charter for Nature Conservation (PDF, 800Kb)
Co-authored paper for a special edition of Ambio’s Journal of the Human Environment arguing the need for a charter to help in the effective use of technology for conservation

March 2015
GSMA Mobile for Development (PDF, 2Mb)
Co-authorship of a study on the use of data to help unlock and scale mobile projects

January 2011
Musings (PDF, 3.8Mb)
A collection of the ten most popular posts published on the kiwanja.net blog

October 2010
Design Without Boundaries (PDF, 2.5Mb)
An article, co-authored with Joel Selanikio, on how to design and build mobile applications

June 2008
Didactics World (PDF, 150Kb)
Guest Opinion piece on the potential of mobile technology for m-Learning in the developing world

September 2005
Oryx Journal article (PDF, 40Kb)
‘Conservation News’ article on the use of text messaging in conservation, and the release of FrontlineSMS

February 2004
Mobile Phones: An Appropriate Tool for Conservation and Development? (PDF, 260Kb)
Co-author on an early comprehensive report on mobile technology use in international development