“ICTs are regularly touted as holding great potential to enhance the work of nongovernmental organizations (NGOs) working for positive social and environmental change around the world. With many NGOs working in difficult and challenging conditions, any technology that enables improved communication is sure to be welcomed. However, while the development community has traditionally been quick to grasp emerging technologies – mobiles in particular – the same cannot be said for their conservation counterparts”

At the University of Canberra, Senior Research Fellow Dr Robert Fitzgerald has been evaluating FrontlineSMS as a replacement for a commercial application previously implemented in their Cambodia Crop Production and Marketing Project (CCPMP). Since 2006, Robert and his team have been developing an SMS-based market information service for maize and soybean farmers and traders in western Cambodia.

CCPMP research had already highlighted poor communications between the different levels of the supply chain as a major challenge to the agriculture sector in the region. According to Robert, “We explored various options for the development of an improved marketing communication system and proposed to local stakeholders the development of an Electronic Marketing Communication System (EMCS) based on the use of SMS technology. We undertook a pilot project in which daily grain market information was collected by the Ministry of Commerce and entered into a database that was accessible by mobile phone in Cambodia using SMS”.

The pilot project proved highly successful and its impact stimulated further work in a follow-up project funded by the Australian Centre for International Agricultural Research (ACIAR). It was at this point that Robert and his team began to explore alternative messaging systems.

“One of the most encouraging aspects of our early work was the excitement generated amongst farmers, traders, ministry officials, silo owners and potential development partners. The SMS concept was very appealing but we faced a real challenge – we wanted to use this excitement to move from a trial project to a fully fledged operating model but we needed a software application that would ensure the long term sustainability of community-based communication systems. Because the project is working with two NGOs based in western Cambodia, it was imperative that we implemented a cost-effective solution that could be managed by local staff. As it turned out, FrontlineSMS had it all. Not only is it open source but it is simple to install and maintain, and has more functionality than our previous software, all combined with a much better user-friendly interface”.

Since launch of the latest version earlier this June, Dr. Fitzgerald has been testing FrontlineSMS at the University of Canberra along with a Cambodian Phd student, Nou Keosothea, who will be working with him to conduct in-country trials over the next few weeks.

Our plan is to install two FrontlineSMS systems in the Pailin and Samlaut regions of western Cambodia. Once these are installed we will conduct a series of stakeholder workshops to better understand the communication aspects of the maize and soybean production and marketing supply chain. Price, weather updates, handy hints will all figure on these systems in addition to standard SMS-based communications

Watch this space for further updates as the project moves forward, and details of a number of other agriculture-based FrontlineSMS implementations being planned by NGOs around the world.

Professor Tim Unwin from the ICT4D Collective has appointed kiwanja’s Ken Banks its latest member. The Collective, based at Royal Holloway at the University of London, is a group of people committed to undertaking the highest possible quality of research in the field of ICT4D, and making the results of this available freely to the global community. They do this primarily in the interests of poor people and marginalised communities. In 2007, the Collective was awarded the Status of a UNESCO Chair in ICT4D

As well as research, the Collective undertakes teaching at undergraduate and postgraduate levels, and contributes to the delivery of focused short courses on all aspects of ICT4D. Members of the Collective also provide consultancy services in the field of ICT4D

It’s been an interesting last few days. I’ve just finished giving talks at the School of Oriental and African Studies (SOAS), and the ICT4D Group at Royal Holloway. Both may be ‘London-based’ universities, but they were both totally different audiences. The SOAS crowd were more academically-focussed, whereas the ICT4D audience were more rooted in the practical application of mobile technology, not solely the theory underlying it. I think you can probably guess where I felt most at home.

Saying that, one of the more interesting questions came from someone at SOAS, where I was asked how I defined empowerment in the context of my work, who it was exactly it was being empowered, and who was claiming it. It was an interesting discussion, and something I’ve touched on in the past (see “Whose revolution is it anyway?” from the May 2008 archive). The talk reminded me of my seminar days at Sussex University, where Development Studies students were rewarded for (often severe) critical analysis of thirty-five years of international development failure. Not only were the students wary that they might be hearing about something that may actually be working, a couple of staff members joined in for good measure. There’s nothing like being challenged, that’s for sure.

To remove any doubt about who it is being empowered, and who’s claiming the empowerment, I generally put my end-user hat on. Speaking from their perspective makes it generally much harder to argue. I’ve had enough contact with a growing number of FrontlineSMS users over the past three years to know what it means to them. If FrontlineSMS had helped just one of these NGOs I’d have been happy. The truth is that it’s helping many, many more.

If the SOAS crowd were expecting a technical or theoretical answer to their question, they were about to be disappointed. I’ve always tried to remain user-focussed, and all of my FrontlineSMS blog posts are based on feedback to explain and demonstrate impact. During conference presentations I only briefly introduce the FrontlineSMS ‘platform’ (essentially a laptop, a phone, a cable and a pile of code). What most people are interested in hearing is the meaningful, practical, tangible kind-of stuff that happens when people start figuring out the kinds of things they can do with it. This is where the rubber meets the road, and this is what formed the basis of my answer.

To me, the empowered includes NGO fieldworkers in Afghanistan who receive daily security messages and alerts. During a recent Taliban attack FrontlineSMS was…

… essential for us getting the word out quickly. E-mail was down, voice was spotty but SMS still worked. We also had female staff at a school near the incident and were able to tell them to stay put till things quietened down. All my staff made it home safe today

It also includes patients and staff at St. Gabriel’s Hospital in Malawi where, in the words of the staff at St. Gabriel’s Hospital, FrontlineSMS has “adopted the new role of coordinating a far-reaching community health network serving 250,000 Malawians”. And in Aceh, two FrontlineSMS-driven projects – one run by the UNDP – is successfully helping increase income-generating opportunities for smallholder coffee farmers and their families. Many more agriculture-based projects are on the way.

In Iraq, Aswat al-Iraq news agency have implemented FrontlineSMS as an information dissemination tool within a number of locally based news organisations who were struggling to come to terms with local mobile operators. According to the agency:

The effectiveness of FrontlineSMS is evident as we can create, manage and update the profiles of the clients’ groups we created. We now send messages to at least eight countries using different operators in Europe and the Middle East, with the messages delivered to all the numbers at the same time. We are keen to continue using FrontlineSMS as we predict that the demand for our services, via the software, will grow in the future 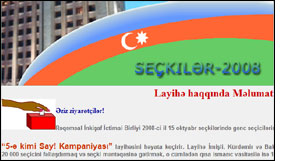 And in Azerbaijan, another local NGO – Digital Development – are using FrontlineSMS to reach out to voters in the forthcoming Presidential elections (the software is being used to encourage youth participation in the electoral process. Not every country has a Barack Obama). According to Digital Development, “FrontlineSMS has been a game-changer for the ‘Civil Society Coalition of Azerbaijani’ NGOs and the ‘Society of Democratic Reforms in Azerbaijan’. The ability to properly manage our text messaging campaigns has added 100% value to the effectiveness of our work”. Earlier this year Digital Development pledged to sign up 80,000 voters via SMS to swing 2008 presidential elections through innovative get-out-the-vote activities, including their “Count to 5!” campaign (pictured).

Many of these users, of course – NGOs, and the communities they’re reaching out to – don’t care what underlying technology delivers a message, or the theory underpinning the application of mobile technology in a developing country context. As long as they get a message and as long as it’s useful, timely, relevant and actionable, that’s all that counts.

And, using FrontlineSMS, that’s just the kind of message increasing numbers of NGOs find themselves being able to deliver.