Earlier this year, Ashoka deployed FrontlineSMS in four African countries to help promote one of their Changemakers campaigns. In Kenya, Ghana, Tanzania and Senegal, members of the public were invited to nominate a great teacher – a champion of quality education – who had made a profound impact on their lives. Previous campaigns had used more traditional media. When Ashoka decided to try text messaging for the first time, they turned to FrontlineSMS.

The campaign was a success. Ashoka said at the time: “We are very excited that we are using this technology. We are reaching out to an audience we couldn’t have accessed otherwise. We received over a hundred SMS in the first day and only one email”. Since then, kiwanja.net and Ashoka have collaborated further, starting with the creation of the Social Changemaking with Mobile Phones Group in May.

With interest in text messaging continuing to rise, Changemakers raised the idea of creating a guide, based on their experiences, to explain to other organisations in their network how to get SMS campaigns up-and-running in the shortest possible time and with the minimum of fuss. There are numerous SMS guides and reports on the web, but few talk NGOs through a simple set of steps to help them physically set up their own messaging hub.

With the help of the Group we’d set up earlier in the year, and input from other FrontlineSMS users, Ashoka released the completed “SMS Quick Start Guide” last week. 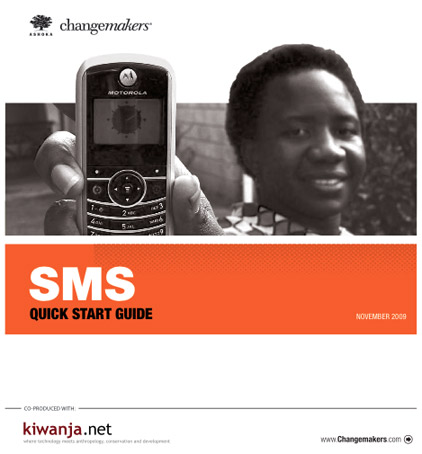 Two further collaborative reports will be released in the coming months. For now, the “SMS Quick Start Guide” can be downloaded here (PDF, 1Mb).