Last week I was called up by a Researcher at Berkeley wanting me to take part in a survey. After a conference in February this year, intriguingly entitled “The UN Meets Silicon Valley“, a number of initiatives were now beginning to emerge (I was invited to the conference, but it didn’t really seem like my kind of thing, despite having had the pleasure of working with the organisation recently). Yes, the gathering was over eight months ago, but we are talking the UN here (I did say this wasn’t my kind of thing, didn’t I?). According to the official conference announcement:

The United Nations meets the Silicon Valley to explore how technology and industry can bolster development. Prominent members of industry, academia, and the venture capital community will take the stage alongside members of the Strategy Council of the Global Alliance for ICT and Development to discuss the partnership between the public and private sectors in the field of ICT and development

It turns out that one of the key outputs from the conference was a call for the creation of some kind of community website, where technology companies in the Valley could connect with the ICT4D community ‘out there’ and become a catalyst for great things. The research taking place now hopes to determine what this community might look like, how it might work, and what it might actually do. Although its aims may be admirable, the thought of yet another community drives me to despair. I’ll happily be proved wrong – I wasn’t obstructive and did make a number of suggestions during my 30 minute conversation with the Researcher – but I can’t help but wonder where our continued obsession with community lies and why it continues to be something we find so hard to crack.

I’m no expert, but I guess you can put online communities into at least two categories – those built around small, micro-specific interest areas – such as a ban on a particular product or company, or the running of a local sports club – and those at the opposite end of the spectrum, the macro-non-specific areas. There are probably millions of examples of the first category, but far fewer of the second. Facebook and MySpace are the two obvious global gorillas that spring to mind (interestingly, the Groups feature in Facebook quite likely provides the platform for many of the newer micro-specific groups, many of which are humorous in nature and seem to serve no specific purpose other than to be funny). When we look at building communities for the more serious ICT4D, or mobile-related communities, it does no harm to look at how the Facebook ecosystem works. Why, for example, has it proved relatively painless for me to attract over 850 members to the Social Mobile Group, a group I set up to tap into the wider interest in mobile phones beyond the activist and professional communities? What motivates people to join that group, rather than some of the others outside of Facebook (or even within Facebook, for that matter)? Tough questions.

For me, one of the key issues has always been one of motivation. You know, the “Why should I make the effort to register myself on this site?” conundrum. Very few sites have really cracked this because few have been able to effectively deconstruct this motivational puzzle. And even when people are convinced that it’s worth their while registering on a site, getting them active is another thing. After all, you may be able to lead someone to a community, but you can’t make them post. Maybe one key advantage of Facebook is that once you’re registered you can show your support for multiple causes or interest groups with a couple of simple mouse clicks. If the act of registering is the problem, how to we get around that? No registration equals no idea who the members are, and what kind of community is that? Or, is knowing who’s in a community a defining factor of that community? 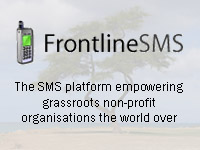 My Facebook experiment has expanded recently with the creation of the FrontlineSMS Supporters Group. Within the next few months the main FrontlineSMS website will be re-launched with a range of new features for the growing family of FrontlineSMS users, and others interested in mobile use in developing countries. When it comes to building a true, active community around it though, I remain hesitant. But one thing’s for sure – I’ll continue watching what’s happening on Facebook. I’m sure the answer lies in there somewhere…

2 thoughts on “The community conundrum. Continued…”