This article – “Mobile telephony and the entrepreneur: An African perspective” – was originally written for the autumn edition of Microfinance Insights magazine. A copy of the original article is available as a PDF here

Whenever the words “Africa” and “economic development” meet – which is often – it’s usually in the context of external, foreign aid and large, multilateral development efforts. Large numbers and global donor agencies do, after all, have a habit of stealing the headlines. You’d be forgiven for thinking that little else was happening.

But you’d be wrong. 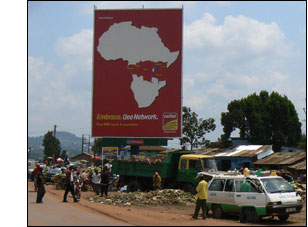 With penetration rates in excess of 30%, and handset sales among the highest in the world, Sub-Saharan Africa is witnessing a new kind of home grown, mobile-driven economic development. The numbers may not be that big – yet – but the impact on the ground is obvious and the difference it is making to people’s lives clear. Farmers are now able to access market information through their phones, increasing income in some cases by up to 40%. Casual labourers are able to advertise their services, allowing them to take on more work and avoid down-time waiting on street corners for work to come their way. Unemployed youth can get job vacancies on their phones, alerting them when work becomes available. And, for the first time, the un-banked can transfer money to relatives, or make payments for goods and services, through their phones.

Their impact is not restricted to economic empowerment, either. Mobile phones are also able to provide health information and advice, remind people when to take their medicine, and allow citizens to engage more actively in civil society by monitoring elections and helping keep governments accountable. Others can get wildlife early warnings, mitigating against livelihood- and life-threatening human-elephant conflict. It turns out that mobile phones can be useful for much more than just ordering pizza, looking up the football scores or arranging a Friday night out.

The impact, and uses of, mobile technology in the developing world is nothing short of staggering. What’s more, it has spurned the growth of a whole new informal sector, empowering local entrepreneurs and businesspeople the continent-over. With immense value placed on owning a phone, there’s no shortage of opportunities for people to make a little money on the way.

In “Mobile Telephony: Leveraging Strengths and Opportunities for Socio-Economic Transformation in Nigeria”, Christiana Charles-Iyoha sheds some light on the value Nigerians placed on their mobile phones, many describing losing them as literally a matter of life or death for their businesses. At the same time, many – not only in Nigeria but also many other parts of Sub-Saharan Africa – have been quick to exploit the numerous opportunities that this explosion in ownership brings. 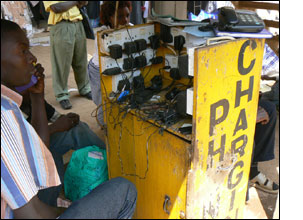 Anyone who’s travelled to an African country in the past couple of years would not have failed to notice women selling airtime on the streets, children dodging cars at main junctions selling chargers and phone covers, street vendors making a living charging people’s phones, and mobile phone repair shops helping people squeeze one last drop of life from their old phones. There is also a thriving second-hand market, with stalls selling all manner of new and recycled handsets. Entrepreneurs are even building their own mobile-mobile services, strapping phones and spare batteries to the front of bikes and travelling to where the business is.

In a now much-cited 2005 study, London Business School economist Leonard Waverman concluded that an extra ten mobile phones per hundred people in a ‘typical developing country’ leads to an additional 0.59 percentage points of growth in GDP per person. From a government perspective, taxes and revenue generated from an insatiable demand for communications no doubt fuels a large part of this growth, but there’s also little doubt a significant amount also comes from a growing, and increasingly efficient informal sector. At the bottom of the pyramid (BOP), where micro-loans of just a few dollars are a proven catalyst in helping people work their own way out of poverty, we have a technology which has the clear potential to do the same.

Of course, more phones in more hands also presents opportunities for the microfinance (MFI) sector, many of whom seek to improve the lives of those same people in or around the bottom of the pyramid (BOP). Mobile technology has already been embraced by organisations such as Grameen, with their now-much duplicated Village Phone programme, but mobile phones also present organisational opportunities through improved communications with field staff, and options to electronically capture data from the field. MFI’s are already utilising text message (SMS) technology to communicate with customers, using software such as FrontlineSMS – which turns a computer and attached mobile phone into a central SMS communications hub – to run surveys and collect information. In many remote areas where keeping in touch with borrowers, or collecting financial data, is a challenge, the humble SMS is opening up a raft of new opportunities. Grameen Village Phone in Kampala, Uganda, a user of FrontlineSMS, comments:

We use it to automate communication with our village phone operator (VPO) channel. It really makes our lives easier by giving us a clear record of what’s been sent and responded to that can be reproduced and reused elsewhere. It also helps us promote a culture of SMS use for communications

As more and more people become connected, future studies of Sub-Saharan Africa and its economic potential will find it harder and harder to ignore the growing influence of mobile technology, and the power and spirit of African entrepreneurship – and grassroots NGOs – to capitalise on it. There’s little doubt that this spirit has always been there, but perhaps it’s just taken mobile technology to create an environment in which much of it can thrive.

3 thoughts on “Mobile telephony and the entrepreneur”